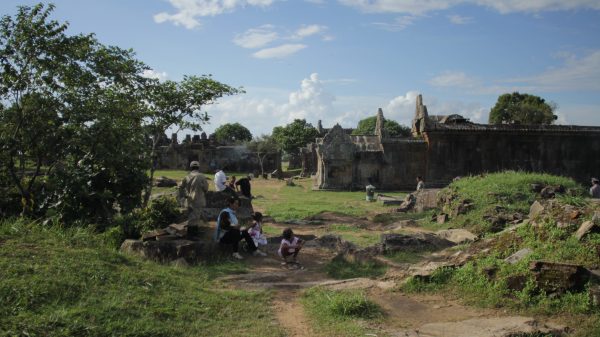 Still from Nontawat Numbenchapol’s film Boundary (2013), courtesy of the artist

Nontawat Numbenchapol’s movie Boundary (2013) will be accessible online on 5 October for 48 hours.

Brian Curtin is an Irish-born art writer, lecturer and curator of contemporary arts. He holds a PhD in studio art from the University of Bristol and has been based in Bangkok since 2000. Brian’s work explores dialogues between contemporary art, Queer theories and studies in visual and material cultures. His commentary, essays, interviews and reviews have been published in Art Journal, Artforum, Art Asia Pacific, Circa, Craft Research, Flash Art, Frieze, Journal of Curatorial Studies and Parachute and elsewhere. Published profiles of artists include Alice Maher, Paul Pfeiffer, Araya Rasdjarmrearnsook, Collier Schorr, Jakkai Siributr, and Apichatpong Weerasethakul. His monograph Essential Desires: Contemporary Art in Thailand was published by Reaktion Books in 2021. Brian’s research addresses challenges in thinking through hierarchies and antagonisms that limits critical approaches to modern and contemporary art; and published essays in this respect explore the art-historical marginalising of “decoration” and also problems of national identity as a frame for recent art. Brian has presented at conferences and symposia in Kuala Lumpur, Kyoto, London and Singapore. He has held writer’s residencies in Beijing and Kuala Lumpur. Curated exhibitions include China, New York, Korea and Britain as well as regionally in Southeast Asia. He managed the experimental venue H Project Space in Bangkok from 2011 to 2018 which now functions under the mantle Brian Curtin Projects. Curatorial work has been funded by the Arts Council England and Australia Council for the Arts. Brian has been a nominator for the Prix Pictet award in photography, the Sovereign Art Prize, and collaborations with Saatchi Gallery London. He has lectured in art history, visual culture and studio courses at the Faculty of Architecture of Chulalongkorn University, Bangkok, since 2006. In 2018 Brian led Uncommon Pursuits: A Temporary School for Emergent Curators in Southeast Asia at Sàn Art, a non-profit in Ho Chi Minh City (his website).

May Adadol Ingawanij is a writer, curator, and teacher and Professor of Cinematic Arts at University of Westminster, where she co-directs the Centre for Research and Education in Arts and Media. She works on decentered histories and genealogies of cinematic arts; avant-garde legacies in Southeast Asia; forms of potentiality and future-making in contemporary artistic and curatorial practices; aesthetics and circulation of artists’ moving image, art, and independent films in, around, and beyond Southeast Asia. Ingawanij’s recent publications include articles on the Karrabing Film Collective, Nguyen Trinh Thi and Araya Rasdjarmrearnsook. Her curatorial projects include Animistic Apparatus and Lav Diaz: Journeys. She is writing a book entitled Animistic Medium: Contemporary Southeast Asian Artists Moving Image.

Nontawat Numbenchapol (b. 1983, Bangkok) is a Thai film director and television screenwriter who is widely recognised for his documentary work. He graduated from the Visual Communication Design Department, Faculty of Art and Design, Rangsit University. Numbenchapol’s second documentary By the River, about the Klity villagers affected by water lead contamination. It became the first Thai film to receive the Special Mention award from the Locarno International Film Festival.In 2016 Numbenchapol created an hybrid docu-fiction #BKKY, a story of a teenage girl, “Jojo”, questioning life and identity. Jojo’s character is a compilation of 100 teenagers interviewed in Bangkok about their loves and dreams and coming-of-age just after graduating high school. It premiered in October 2016 at the Busan International Film Festival before it received the Jury Award for best feature- length film from Lesbisch Schwule Filmtage Hamburg, Germany. His Mobile Lab Project experiments and researches on new ways of human visual and sound perception different from normal human perception. The project researches historical, social, and political information recorded over many generations until they became living belief systems. The project aims to change the perception of those beliefs via recording and expression onto visual and aural media. The purpose is to open the minds of people who receive communications from Mobile Lab, so that there is always the another side of established beliefs and new beliefs can rise up.