In this section, users can read short essays by members of the COTCA Team about specific images or collections which are included in the COTCA Digital Archive. Some essays are also built around general events, people, or institutions which correspond with specific themes and items appearing in the case studies. 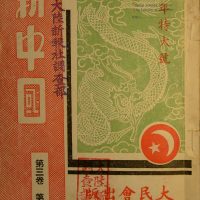 The Daminhui (lit., "Great People's Association") was organised by the Japanese special service in Shanghai in 1938,[1] but was officially directed by the veteran Kuomintang member Wen Zongyao in Japanese-occupied east and central China.[2] It has been described as the "flagship enterprise of the Reformed Government [of the ROC]."[3] The Daminhui was responsible for a variety of propaganda work, and learnt its skills directly from propaganda organisations in north China, especially the Xinminhui. Within the Daminhui's Propaganda Department worked Chinese graphic artists, journalists, dramatists, and activists. The Daminhui made a particular name for itself in mobilizing local communities for pro-occupation celebrations.[4] Much of the propaganda work undertaken by the Daminhui (and reproduced in its house pictorials like New China) looked remarkably similar to the "salvationist" (jiuguo) propaganda that had been developed by the Chinese resistance in Wuhan in 1938.[5] This was because a number of the Daminhui's affiliated agencies were specifically designed to emulate what the Japanese saw as effective methods of persuasion developed by the Chinese resistance early in the war. Nonetheless, the Daminhui developed its own "brand." It operated under a logo comprised of a five-pointed star and a crescent moon. The influence of the Daminhui would continue to be felt in occupied east China through until 1945, as many of its members joined the ranks of Wang Jingwei's government at its formation in 1940.     [1] T'ien-wei Wu, "Contending political forces during the War of Resistance," in China's Bitter Victory: The War with Japan, 1937-1945, eds., James C. Hsiung and Steven I. Levine (Armonk, NY: East Gate, 1992) , 66–67. [2] Wen Zongyao, "Daminhui Wen huizhang gao minzhong shu" [Letter from Director Wen of the Daminhui to the people], Xin Zhongguo 2, no. 11–12 (December 1939): 2–3. [3] Timothy Brook, "Occupation state building," in China at War: Regions of China, 1937–1945, eds. Stephen R. MacKinnon, Diana Lary and Ezra F. Vogel (Stanford, CA: Stanford University Press, 2007), 35. [4] Liu Jie, "Kangzhan chuqi Huadong lunxianqu qin-Ri qunti yanjiu: yi Daminhui Zhenjiang lianhe zhibu wei zhongxin de tantao" [A study of pro-Japanese groups in occupied areas of east China in the early stages of the War of Resistance: A discussion of the Daminhui's branch office in Zhenjiang], Zhongyang yanjiuyuan jindaishi yanjiusuo jikan 98 (2017): 89–114. [5] As detailed in Stephen R. MacKinnon, War, Refugees, and the Making of Modern China: Wuhan, 1938 (Berkeley, CA: University of California Press, 2008). 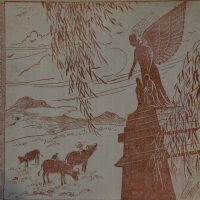 In pre-WWII Shanghai, one of the most recognisable landmarks on the city's Bund had been Henry Fehr's art nouveau Allied War Memorial, first erected in 1924, and featuring at its top a statue of a winged Victory. According to Robert Bickers, the monument was so dominant a sight in Shanghai that it made its way into the city's culture. It even made an appearance in the 1937 film Street Angel (Malu Tianshi), directed by Yuan Muzhi.[1] This may help explain why the statue came to be referred to colloquially in the city either as the "Angel of Peace" (heping tianshi) or the "Victory Angel" (shengli tianshi) during the 1930s. As Paul Bevan has shown, the figure was also utilised in social and political cartoons by the likes of Zhang Guangyu in this same period.[2]   Following the Japanese invasion of China in 1937, however, Fehr's Victory was given a new significance for a variety of Japanese client states. Even prior to the establishment of the Reorganised National Government (RNG) in 1940, for example, the figure was worked into occupation propaganda in eastern China, with the notion of an "angel of peace" resonating with both Japanese client states set up in 1938 which promoted a negotiated peace with Japan, and with Wang Jingwei's "Peace Movement" (Heping yundong) after 1939. Fehr's figure was appropriated in the same year as into the cover design for one of the main vehicles for the Peace Movement in Shanghai, the periodical Gengsheng (Rebirth). Under the RNG, Fehr's figure was transformed into an "goddess of peace" (heping nüshen), and was regularly featured in depictions of the Shanghai streetscape in RNG-sponsored graphic art. Indeed, the RNG "angel of peace" motif into the visual landscape of the RNG well beyond Shanghai, and wherever references to anthropomorphised peace were useful. In some instances, children dressed up as the "angel of peace" when publicly commemorating important dates on the RNG calendar. Elsewhere, Fehr's monument was re-imagined in rural Chinese landscapes by RNG artists as a harbinger of RNG notions of peace. Ironically, with the "return" of the foreign concessions to RNG rule in 1943, the Japanese ordered that symbols of Western imperialism be removed from Shanghai's streets. This, of course, included Fehr's Allied War Monument (with Victory herself being removed, but her plinth left intact). The "angel of peace" thus provides us with an insight not simply into the eclectic origins of many of the symbols adopted by the RNG, and the creative ways in which this regime appropriated pre-war symbols of peace into a wartime cultures of occupation. It also illustrates the limits of RNG autonomy when it came to constructing visual cultures under foreign domination.     [1] Robert Bickers, "Moving Stories: Memorialisation and its Legacies in Treaty Port China", in Max Jones, et al (eds), Decolonising Imperial Heroes: Cultural Legacies of the British and French Empires (London: Routledge, 2016). [2] Paul Bevan, A Modern Miscellany: Shanghai Cartoon Artists, Shao Xunmei’s Circle and the Travels of Jack Chen, 1926-1938 (Boston: Brill, 2016), 267.